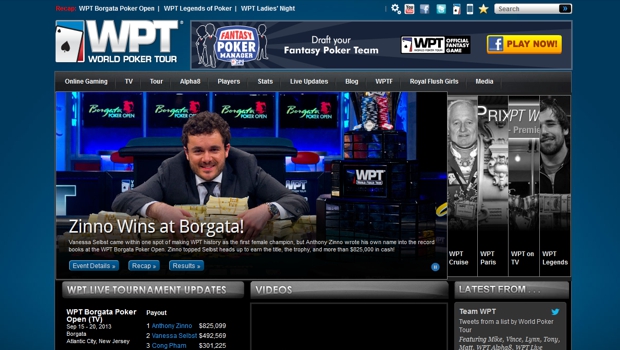 The 2013 World Poker Tour Borgata Poker Open $3,500 no-limit hold’em event attracted a total of 1,189 entries which resulted in a prize pool of $3,805,989.  Only one player, 31 year old Anthony Zinno, who hails from Cranston, Rhode Island, remained six days after the massive event got underway.  Zinno was thrilled to earn his first World Poker Tour title, the first place prize of $825,099 as well as an amount of 1,440 Card Player of the Year points.

The event was Zinno’s fifth final table appearance this year and includes his fourth place finish in the Card Player Poker Tour Venetian $5,000 main event when he won $86,964.  Zinno has earned 2,192 points and $935,842 in year to date earnings so far putting him in 19th place in the overall standings in the POY race.

Vanessa Selbst had previously made two final tables which included a win in the Poker Stars Caribbean Adventure $25,000 high roller for an amount of $1,424,420.   Selbst has now climbed to 7th place in POY rakings with $2,297,645 in year to date earnings and 2,922 POY points.  Selbst’s career earnings amounts to $7,883,391 which has made her 35th on the list of career live tournament earnings.