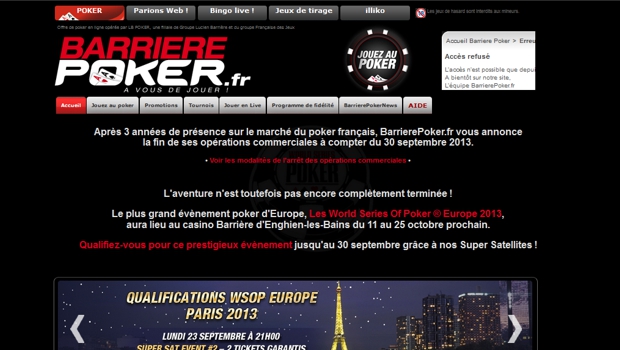 The Barriere Group announced on Friday that it would regrettably be shutting down its online poker room at the end of this month after operating in the French poker market for a period of 3 years.

The closure will result in online poker players in France losing yet another French regulated online poker operation following the shut down of rival Partouche Interactive’s French operation at the beginning of this year.

The company claims that the reason for its decision to shut down the internet poker room is due to weak economic conditions and a decline in the local poker market.

An advisory on the Barriere Company’s website states that after operating for three years in the French poker market, BarrierePoker.fr has had no option but to announce the end of its commercial operations.

The shutdown of its online poker operation is not expected to negatively influence Barriere’s ambitions in the United States legalized market where it has a partnership with Caesars Interactive.

Barriere has revealed that its existing customers will be provided with full details as to how they can cash out their funds and convert their points.