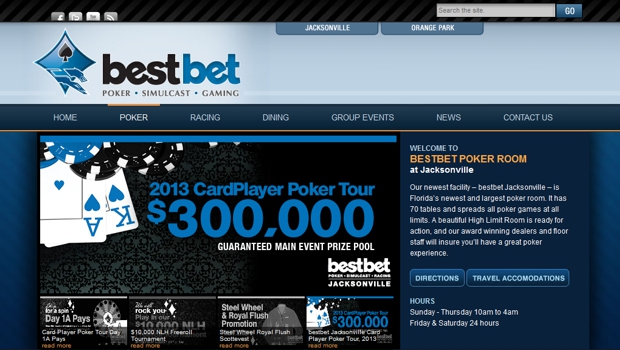 Season II of the Card Player Poker Tour is scheduled to commence on Thursday, 29th August, 2013 at bestbet Jacksonville which is Florida’s largest poker room and one of the largest in the world.  The Poker Tour will see players being offered lots of promotions to participate in during the 13 event tournament series.

bestbet Jacksonville is offering players from the $10 million guarantee Seminole Hard Rock Poker Open that is taking place at the Hard Rock Hotel and Casino in Hollywood, Florida until Thursday, 29th August, 2013, a lucrative incentive to travel north.  Those players who produce a receipt from the $5,300 championship event will be given entry into a unique $10,000 no-limit hold’em freeroll tournament that will take place at 3 pm on Wednesday, 28th August, 2013.  These players must produce an ID to match the receipt and each player is only allowed one free entry to the tournament.  The tournament is also open to players who did not play in the Seminole Hard Rock Poker Open for an entry fee of just $150.

All Day participants will be rewarded by bestbet for playing early by being entered into a raffle drum that could see them win bestbet swag, cash as well as seats into CPPT satellites and main event entries.

The bestbet Jacksonville’s poker room boasts 70 tables and a massive simulcast wagering facility with several 120” wide screens.   A full food and beverage service is also available at the poker room which is located close to Jacksonville International Airport.