The World Poker Tour (WPT) recently announced its end of season schedule which consists of a lineup featuring seven stops in 2014.

Two of the tour stops will be in Atlantic City, two will be in California and three in Florida which has become a fast growing hotbed.

The tour will then head down to Coconut Creek, Florida, a week later for the World Poker Tour Lucky Hearts Poker Open.

The World Poker Tour World Championship will conclude Season X11 with its third appearance of the season at the Borgata.

Adam Pliska, President of World Poker Tour revealed that they have gone to great lengths to ensure that all their players on the Main Tour, WPT Regional or WPT National events will get to enjoy top notch experiences at leading venues around the globe. 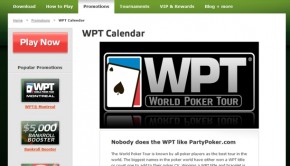