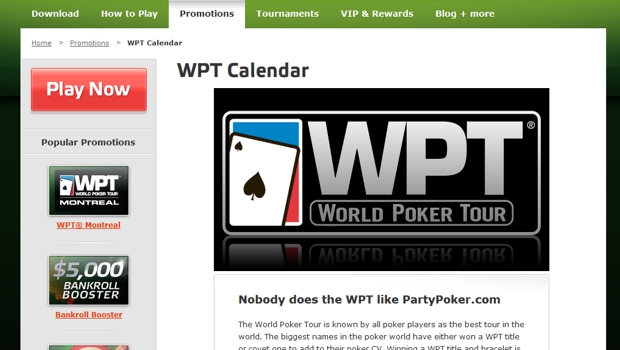 PartyPoker has revealed that it has teamed up with World Poker Tour (WPT) to launch a brand new UK based five-stop poker tour that will fall under the umbrella of the World Poker Tour.

The new PartyPoker sponsored tour is a first poker tournament to take place in the United Kingdom where each of its main events is played as an accumulator tournament.

According to John Scanlon, the Poker Manager at Aspers Casino Westfield Stratford City, players are given an option to buy-in one, two or all three of the Day 1 flights with the accumulator format.   Scanlon added that players’ chips are bagged and moved forward to Day 2 at the end of each flight and that all chips from each flight are accumulated in order to give players their total starting stack for Day 2.  Scanlon also said that the tournament is based on an original format taken from the Aussie Millions that saw a huge fuss amongst players with regard to the best strategy to play and which allows more people into the game at different levels of buy-ins.

The new tour is believed to be heading to venues in Milton Keynes, Newcastle and Northampton, although this has not yet been confirmed.