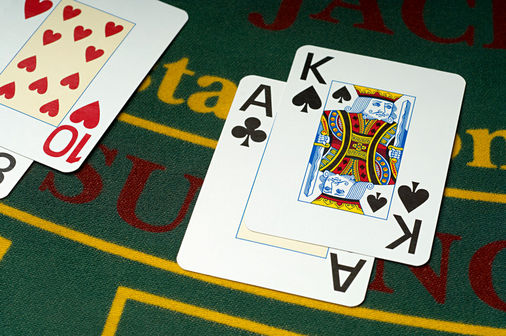 When playing blackjack, one of the two most common playing decisions players face is standing, hitting being the second one. Either decision should not be made hastily or on the basis of hunches and intuition. Instead, players should strive to play optimally by using the correct basic strategy for hitting and standing, applicable to their blackjack variation of choice.

The latter has been devised by capable game theorists and mathematicians who have continually refined it over the years. Basic strategy is available in the form of special cards, containing a chart that shows you the correct standing and hitting decisions for all player totals against all upcards of the dealer.

You will find these strategy cards on all landbased casino floors. The personnel at many brick-and-mortar gambling venues indeed allow and even encourage players to consult their strategy cards when they sit at a blackjack table. Many online blackjack variations are equipped with customizable basic strategy charts, allowing players to tweak some of the moves if they find it necessary.

Even professional players follow basic strategy for their hitting and standing decisions. In this article, we are going to expand on what standing in blackjack is, what the correct hand signals for this move are, and when players should stand on their hands rather than hitting.

How to Indicate a Stand in Blackjack

Standing (also known as staying) in blackjack occurs when the players are satisfied with the strength of their starting hands after the initial deal and do not request additional cards from the dealer. Players are granted the freedom to stand on any hand whose total is under 21 or exactly 21.

Standing is no longer a viable course of action if a hand’s total has exceeded 21, in which case, the player busts and automatically loses. Players cannot stand whenever they are dealt a blackjack, i.e. a two-card hand that contains an ace and a ten-value card like 10, K, Q, or J. Blackjacks are automatic winners (unless the dealer also has one) so it makes no sense to hit them, in the first place.

Whenever one splits a pair of aces, the dealer would usually draw only one extra card to each ace. The two hands will automatically stand in such cases since players are normally disallowed from hitting split aces. Hands you have doubled down on also stand automatically after the dealer hits them with a third card.

So far, we explained how standing works for players. However, blackjack dealers lack the freedom granted to players when it comes to hitting and standing. Instead, they follow the fixed standing rules the house has determined for them. There are two types of house standing rules – the dealer must either hit soft 17 (H17) or stand on all 17s, depending on the casino and the particular table.

Hitting soft 17 means that the dealer must always draw if they have A/6 or less. The H17 rule works to the advantage of the house since it enables the dealer to potentially improve their hand total without the risk of busting by taking one more hit.

Busting by drawing a third card is impossible with a soft 17 because the ace in the dealer’s hand has a flexible value of either 1 or 11. Therefore, the hand’s total is either 7 or 17. If the dealer draws a ten as their third card, their hand will turn into a hard 17, which automatically stands. The ace loses its flexibility and is counted as 1 in this instance.

The alternative is referred to as S17, which means that once the dealer has 17, they must automatically stand, not drawing any additional cards, regardless of whether the hand is soft or hard. Standing on all 17s slightly swings the advantage in favour of the player since it reduces the house edge by 0.22%. The dealer is less likely to outdraw the player under the S17 standing rule.

When Should Blackjack Players Stand

By choosing to stand, a player at least knows they will not bust by going over 21. However, standing is recommended by basic strategy only for certain player totals against specific upcards of the dealer.

Things get further complicated because the correct plays for standing and hitting are affected by the standing rules for the dealer. Whether they hit or stand on soft 17 is taken into account in some situations. The number of decks the respective blackjack variation uses also bears consideration.

One thing that is irrelevant for the optimal standing plays is the availability or absence of doubling down after a split (DAS). Standing decisions can also differ for the same totals, depending on whether the hand is hard or soft.

Practice is the best way to master the correct standing decisions. If you struggle to memorize all the optimal moves from the basic strategy chart, you can always practice at an online casino by playing blackjack with free demo credits.

Many online blackjack games support this option unless they are hosted by live dealers, in which case, you will need a real-money deposit. Another option is to try one of the free basic strategy trainers you can find on the internet.

If you misplay a hand, the trainer will correct you by displaying the optimal standing or hitting move against the respective upcard of the dealer. Your accuracy score is shown as a percentage at the end of each training session. Players can also choose from two levels of complexity, normal and difficult. We suggest you start at the normal level and build from there, especially if you are completely new to the game.

Hard hands in blackjack are either completely aceless or contain aces that have lost their flexibility and are assigned a value of 1. The worst possible hard hands one can get in blackjack are hard 12 through hard 17.

Regardless of what upcard the dealer shows, such hard hands are sure losers for the player in the long term. What adds insult to injury is the fact that these card totals occur quite often. You can expect to see them approximately four per every ten hands.

Below, you will find the correct plays for standing on hard totals in all blackjack variations. These coincide across all games, so feel free to use them in single-deck, double-deck and multi-deck blackjack games where the dealer stands on soft 17.

Soft hands require a different approach than hard ones because of the flexibility the ace gives them. Since the ace here has an “adjustable” value, it is impossible for players to bust by taking one more hit after the initial deal.

Unfortunately, it is a widespread practice among novice blackjack players to misplay hands like soft 17, for example, which ultimately costs them money over the long haul. As a matter of fact, soft 17 and soft 18 are two of the trickiest and most frequently misplayed hands in blackjack.

Rookie players treat them as hard totals and choose to always stand, thinking they are in the “safe” zone with hands totalling 17 or higher. However, these totals are not strong enough against certain dealer upcards, not to mention the average winning hand in blackjack is estimated at 18.5.

Additionally, players are recommended to double on soft 18 and soft 17 when the dealer is in a weak spot, rather than merely standing. This allows them to extract greater profits from their soft hands when the dealer is at a disadvantage. You can find the optimal standing plays for soft hands below. The correct moves for some soft hands are influenced by deck number.

Pairs are commonly associated with splitting although this move is not optimal in all scenarios. The dealer’s upcard and the value of the respective pair bear consideration as well. Basic strategy advises us to stand on pairs in a select few cases. Players should stand on the following pairs:

Some less knowledgeable players are in the habit of adopting the dealer’s rules for standing and hitting. This is to say they would always draw to 16 or lower totals and stand on 17 and anything beyond. Such people restrict their moves to hitting or standing only. God forbid they double down, split or surrender because the dealer never does.

The logic behind this approach is simple – the house has the edge so if players follow the moves of its representative, the dealer, they would improve their chances of winning. We regret to say this could not be any further from the truth.

Actually, it is quite the opposite. By mimicking the dealer, you increase the house edge that works against you. The boost is quite dramatic as the casino advantage increases to approximately 5%. This percentage is ten times higher than the advantage the house has over players who follow basic strategy to the tee, or roughly 0.50%.

Now, why is that? As we explained earlier, it was established through simulations that 18, let alone 17, is an overall losing total in the long run since the average winning hand in blackjack is 18.5. You already have a house edge grinding against you so why increase it by following the dealer’s fixed rules?

The most viable course of action for the player is to stand or hit in line with basic strategy. Of course, this applies to the rest of the possible playing decisions as well. This is the only way for players to reduce their losses and extract more profits from favourable situations.