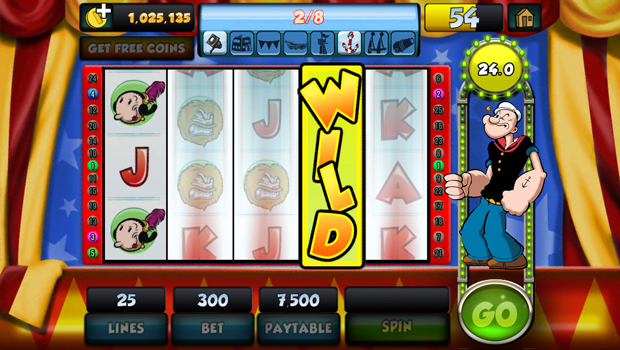 Israel based social gaming studio Dragonplay recently announced its intention to expand its portfolio with a new social casino slot game based on Popeye. The gaming studio has entered into a partnership with King Features Syndicate, a premier distributor of comics, columns, editorial cartoons, puzzles and games to develop the game based on the popular cartoon character. The game features the legendary spinach-eating cartoon hero Popeye and his crew that includes Olive, Bluto, Wimpy and Swee’Pea. A version of the game is currently available on Google Play as a free download. Also bundled is a mini game where players need to help Popeye gather flying spinach cans.

Founder and CEO of Dragonplay, Sharon Tal, said the company was proud to partner with King Features in bringing an action-packed slots title for players. The game brings the most widely recognized cartoon character to life and features stunning hand-drawn animations that allows for endless entertainment. Jarred Goro, licensing manager for the Popeye property said King Features was delighted to see their classic character move from the big and little screens to an innovative slots game for mobile devices. The game includes a bonus round for high scorers and promises plenty of entertainment at every level. King Features Syndicate is a member of Hearst Entertainment and Syndication Group.

Leading online casino software developer and supplier Microgaming announced the release of an innovative Bingo game based on its successful online slot title, Immortal Romance. The game will go live at many online casinos in February. Launched in December 2011, the original online slot title is a 5-reel, 243 ways to win game well known for its attractive graphics, superb game-play and original soundtrack. The Bingo game has all the core features of the original brand with loads of special features and well-known characters that bring new life to the traditional Bingo game.

Immortal Romance Bingo features four games with different themes that focus on the familiar characters Amber, Troy, Sarah and Michael. In addition to standard line prizes, the game features a revolutionary Jackpot Wheel, known as the Chamber of Wins. Once unlocked, there are four different jackpot prizes ranging from cash prizes and free spins on the Immortal Romance online slot game up for grabs.

David Reynolds, Head of Bingo at Microgaming said the company constantly strives to deliver innovative, unique games that focus on player rewards to ensure that their casino operators stand out from the crowd and Immortal Romance Bingo does just that. Bingo fans can catch up with Immortal Romance Bingo at Microgaming’s ICE Totally Gaming stand number N11-120 at ExCel London from 4 to 6 February 2014.