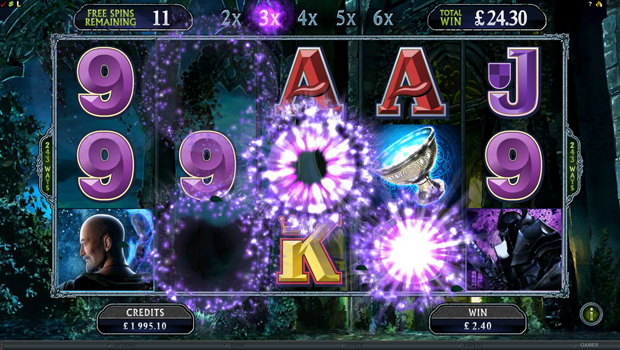 Microgaming’s CEO Roger Raatgever and his team are in a cheerful mood at ICE 2014 as the company continues to reveal its hottest new games. Despite London’s tube strike the mood at ICE is upbeat with Microgaming unveiling three new branded games that includes Jurassic Park, Game of Thrones and Terminator 2. It also followed up its most successful slots titles in recent times with the launch of Avalon II: The Quest For The Grail.

Avalon II is the sequel to the original online slot Avalon, launched in 2006. A mobile version was released in 2010 followed by a multi-player version in 2013. Avalon II went live with its legendary characters brought to life with special 3D rendered animations, professional voice acting and an impressive musical score providing slots enthusiasts the ultimate gaming experience. The 5-reel, 243 ways to win video slot features bonus rounds including an Isle of Avalon bonus with the opportunity to win a 5099 bonus round multiplier.

CEO Raatgever said Microgaming was proud of the mix brought to their extensive portfolio that includes licensed brands like Playboy and The Dark Knight Rises. This is in addition to its iconic brands; Thunderstruck and Avalon that take gaming to a whole new level.

The software supplier also launched a new online slot based on the popular HBO television series Game of Thrones. The licensing agreement with HBO Global Licensing will add to their branded content games portfolio and will be made available to casino operators this year. Game of Thrones is based on author George R. R. Martin’s best-selling book series ‘A Song of Ice and Fire’. It features kings and queens and knights and nobleman vying for the Iron Throne of Westeros. The television series was launched on HBO in 2011 with its fourth season to be released in April.

According to Microgaming’s CEO, Game of Thrones is a relevant and extremely popular show from which the company plans to take all the major elements and develop a slot game for the small screen. Raatgever also promised plenty for operators to look forward to this year. HBO Global Licensing’s director, Josh Goodstadt was also thrilled to be working with Microgaming as the company seeks to extend the show’s reach and offer fans a new way to engage with the show via the slot game.

Microgaming also recently expanded its multiplayer online slots content with the release of ‘The Finer Reels of Life’ slot. The company intends to upload a new multiplayer game to casinos every month. The game features multiple bonus rounds and is expected to be a part of the ‘March to Riches’ online slots tournament with £100,000 in prizes up for grabs.