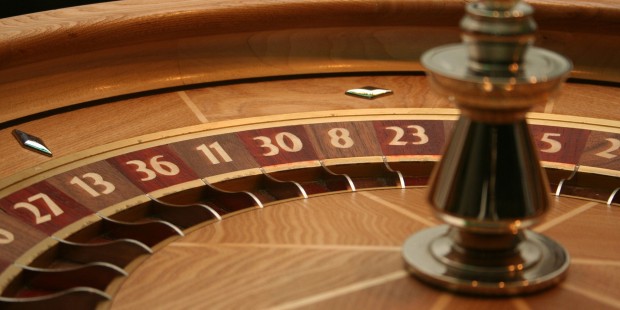 Roulette wheels are usually grouped into two categories; the American wheel, and the French wheel, although hybrid wheels have been seen in countries like the United Kingdom. Below we will discuss some of the basic characteristics that make the individual roulette wheel, and their relation to the rules. In later chapters, we will talk about each wheel’s individual construction and configuration, as well as some tricks as to how to spot a biased wheel. This segment will act as an introduction to the world of roulette wheels; generalizing some of the basic terms and concepts and wrapping them conveniently in a few short paragraphs.

Even though we know that the original ‘American wheel’ was quite different from the ones we are used to seeing today; the fact still stands that among all 3 variations of the game, the American wheel is by far the most ‘unfair’. One of the two key differences between American wheels and their French/European counterparts is that the American wheelhead (the spinning centrepiece) has one extra house number, known as the dreaded double-zero (ergo the wheel is also known as the Double-Zero Wheel). The wheelhead contains 36 number slots, and two house number slots (0, 00).

Other differences include swapping the French betting layout terminology with an English version, and the implementation of non-valued chips when placing a bet. The house edge on almost all bets played on a double-zero wheel are 5.26%. with the exception of the ‘basket’ bet, where the house edge can go up as much as 7.89%. Most Atlantic City gambling halls have the ‘surrender’ option in play. This could bring the house edge down to 2.63% on all even number bets.

If we can call the French wheel the ‘godfather’ of all gambling paraphernalia, we still won’t be doing the wheel any justice. The French wheelhead has 36 number slots a player can bet on; and only one house number. This type of wheel is referred to as the Single-Zero Wheel, as seen below.

Unlike the American wheel, where there are two number slots of the same dye positioned next to the two house numbers, in French Roulette, all the numbers continuously alternate between red and black. The number sequence of the French wheelhead is unique for this type of roulette, and it is thus referred to as the French number sequence. Speaking of the sequence, it presents the numbers in the following order:

French layouts really lack diversity when it comes to colouring chips, and differentiating the different bets (chips), while they are on the table. Because there isn’t a good way to tell the bets apart (aside from actually paying attention to who places which chips), sometimes problems may arise, as to who called what bet, and when.

As we said, the French number sequence differs greatly from the American number sequence, in that it lacks the extra house number. This gives the house less than half the house edge of a regular American style roulette (2.7%, rather than the usual 5.25%). There is another rule, however, that most American players don’t know about. It is called the en prison rule; which can further lower the house edge to a more than satisfying 1.35% but only on even number bets.

Hybrid wheels exist to satisfy the needs of gambling enthusiasts, who are not quite pleased with the double-zero wheel (for all the aforementioned reasons listed above). The wheel is called a hybrid wheel on the account that it features; rather MUST feature elements of both French and American style wheels. It is also the only kind of wheel that is currently allowed/legal in UK casinos.

There are as many variations of ‘hybrid wheels’ as there are stars in the night sky. First of all, the number sequence can be either French or American, but not an amalgamation of both. Where the house number is placed is also the subject of many interpretations. For example, in British casinos, it is customary to place the zero between 26 and 32 (just like a regular French roulette), but other times the zero can be between 1 and 27 (where the double-zero usually stands), or even between 2 and 28. But as long as the wheel has only one house number, and no French markings whatsoever; we can say that it is, in fact, a hybrid wheel.

Some British casinos have a rule, similar to the French en prison; called le partage. It too lowers the house edge 1.35%, but again only on even number bets. US players who enjoy the idea of playing on a hybrid wheel layout will be sad to hear that none of America’s prestigious gambling establishments approves of ‘surrender’ or giving le partage when single-zero wheels are involved; not even in Atlantic City.

To avoid any confusion with the actual “American wheel”; from here on we will be referring to hybrid wheels either as such; or as single-zero wheels, but never American.

The triple-zero wheel is arguably the rarest from all the varieties we have described here. It is featured in only several American casinos but it has failed to gain traction as the single- and double-zero versions. The triple-zero wheel follows the following sequence:

It is similar to European Roulette in the sense the extra zeroes are grouped together, but the rest of the sequence remains the same.

When it comes to odds, it is no surprise that players hate this wheel even more than the typical American one. As you can imagine, the payouts of the game remain the same and do not compensate for the addition of the third zero. Whereas you might expect a house of 2.7% in European Roulette and 5.26% in the American game, a table with a triple-zero wheel goes even further. Specifically, the house edge for this wheel is 7.69%.

We consider the Basket bet in American Roulette bad since it has a house edge similar to this. What does that say about a game where it is the standard?

Racetrack wheel is not a new type of wheel, nor are there games centred around it. Rather it serves an auxiliary role and is most commonly found in virtual roulette. It gets its name from the shape, which resembles a horse race track.

As you know, the betting layout and the wheel itself do not portray the numbers in the exact same way. The layout is ordered for easy access to the betting options. On the other hand, the wheel features the pockets in its own specific way, as we described above. This is done for gameplay purposes and so that no single bet is more likely than another. But what happens if you wish to place bets on neighbouring numbers on the wheel? The layout does not display them and if you cannot remember the exact sequence of the wheel, you might get frustrated. This is where the racetrack wheel comes into play.

It is positioned near the betting layout and shows the numbers in the exact sequence they appear on the standard wheel. What’s more, the racetrack wheel can also hold multiple call bets. This gives you easy access to these special betting options without having to remember what numbers are involved and how many chips you need.

The racetrack wheel does not add any new functionality to the game. It is there to make things more convenient for you. Consider it an addition to the betting layout; one that helps you make easy bets without having to remember the specifics.

Where To Find The Wheels

Double-zero roulette wheels can be found throughout the North American continent; the Caribbean Islands and the Bahamas, and even as far as Asia. Casinos around Europe are still using the usual French/Hybrid single-zero wheels, although double-zero wheels are known to exist, with the tendency of becoming more and more popular. British players will be happy to hear that as far as the law is concerned, using double-zero roulette wheels is still considered an illegal practice.

Most gambling establishments in Canada and the United States do not offer a single-zero variant of everyone’s favourite ‘little wheel’. You can find a detailed list at the end of this guide, of some of the casinos we know offer the single-zero layout and wheel game.