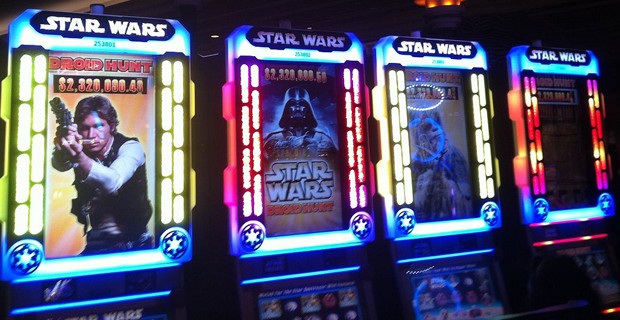 Slot machine enthusiasts and particularly Star Wars and Marvel fans in the US are clearly disappointed following Disney’s plans to phase out the slots machines. According to reports, the decision is based on the company’s family friendly policies. The studio is reportedly using its financial prowess to stall plans for the set up of themed casinos in Florida. The heart of America’s entertainment industry has long been the target for casino operators. Disney has owned Marvel since 2009, and also purchased rights to LucasFilm, the Star Wars production company for $4.05 billion in October 2013.

A Disney spokeswoman said the company’s decision to phase out gambling machines was made a while ago although it is now being made public. According to the studio’s spokeswoman, Marvel discontinued the renewal of slot machine licensing agreements ever since plans of its integration with Disney were finalized. Existing license agreements will continue to be honored until their expiration. LucasFilm’s Star Wars slot machines are to be phased out in the same manner although it is likely to take a few years before they are completely out of the market.

Walt Disney World’s Andrea M. Finger said the company is opposed to the legalization of destination resort casinos. It believes it is inconsistent with Florida’s long time reputation as a family friendly destination. However, president and COO of Las Vegas Sand Corporation’s Michael A. Leven reportedly told the Times that Disney’s conflict against integrated resorts in Florida under its anti-gambling garb actually demeans them significantly. Some competitors argue that it is the fear of competition more than gambling that has had Disney take these measures.

The corporate commercialization of popular brands has been in the news since the time the JRR Tolkien estate revealed plans to sue Warner Bros in November 2012. Its trustees were of the opinion that the Hollywood studio exploited Tolkien’s Lord of the Rings saga in its online video games and slot machines. The $80 million lawsuit claimed that irreparable harm had been done to the late author’s reputation. In March 2013, Warner Bros filed a counter suit. Following its acquisition of LucasFilm, Disney now plans to create more Star Wars films with the possibility of a trilogy as well. Its purchase of Marvel now gives it control over characters such as Thor, Captain America, Iron Man and other popular characters from Marvel.